In 1833 Dr Nathaniel Ward invented a travelling case for plants that would spark a gardening revolution. Here we look at three diverse examples (all of which appear in Abigail Wills’ fascinating new book) that have shaped gardening forever…

How does your garden grow? Does it have a lawn, edged by borders abundant with colourful cottage plants and fragrant roses? Perhaps you have banned colour entirely, opting for a sophisticated palette of ghostly white blooms that glow like moonlight in the fading light of a summer’s day. Or have you ditched your labour-intensive lawn in favour of an eco-friendly dry garden, or a fashionable swathe of prairie plants?

Or maybe you’ve fallen for tender exotics – beautiful but requiring the warm embrace of a heated greenhouse. Or are vegetables more your bag, grown in decorative rows in a kitchen garden or laid out in workmanlike lines on an allotment? You may well have given up on digging too, tending your garden on organic principles and steering clear of synthetic pesticides and weedkillers. 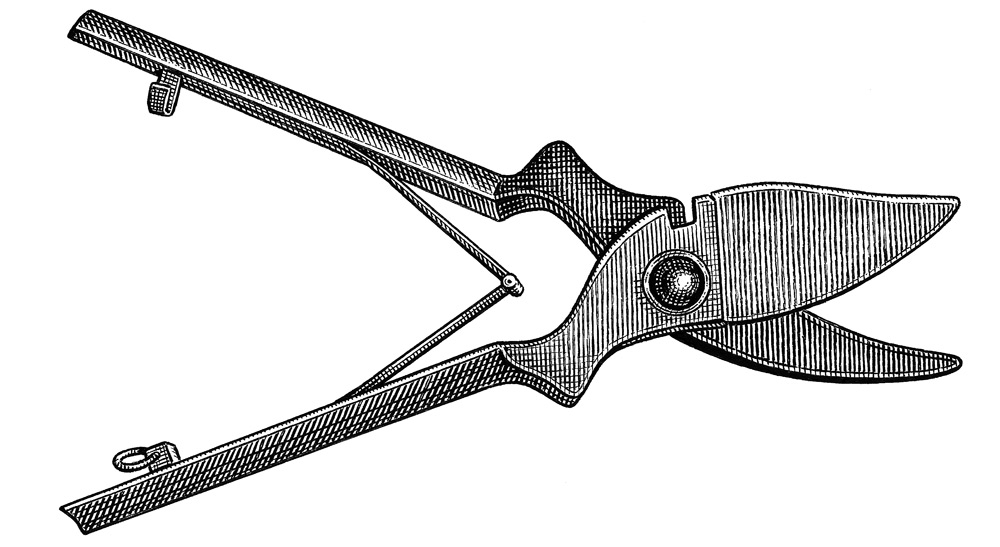 And when you’re not gardening, no doubt you’re mugging up about it (gardening is an addictive and absorbing pastime!), poring over glossy magazines and seed catalogues, checking out the latest trends and expert advice on seasonal jobs in the garden.

So many of these things were once novelties, the result of technological or aesthetic innovation. The impact of nineteenth-century inventions such as Dr Ward’s case and Mr Budding’s lawnmower is still being felt in the twenty-first century, influencing the plants we grow as well as the way we manage them, while some – water features and topiary, for example – have been with us for hundreds, if not thousands, of years.

And when it comes to garden design, perhaps it can be said that there is nothing truly new under the sun. Over the centuries, garden design has evolved through alternating cycles of formality and more naturalistic styles, each reincarnation reinventing its predecessor in a slightly different way. The ebb and flow of fashion is as inevitable in horticulture as it is in hemlines.

The book celebrates 50 of gardening’s greatest ideas – a potted history, as it were, of the everyday things we take for granted in our gardening lives, a few of which are featured below… 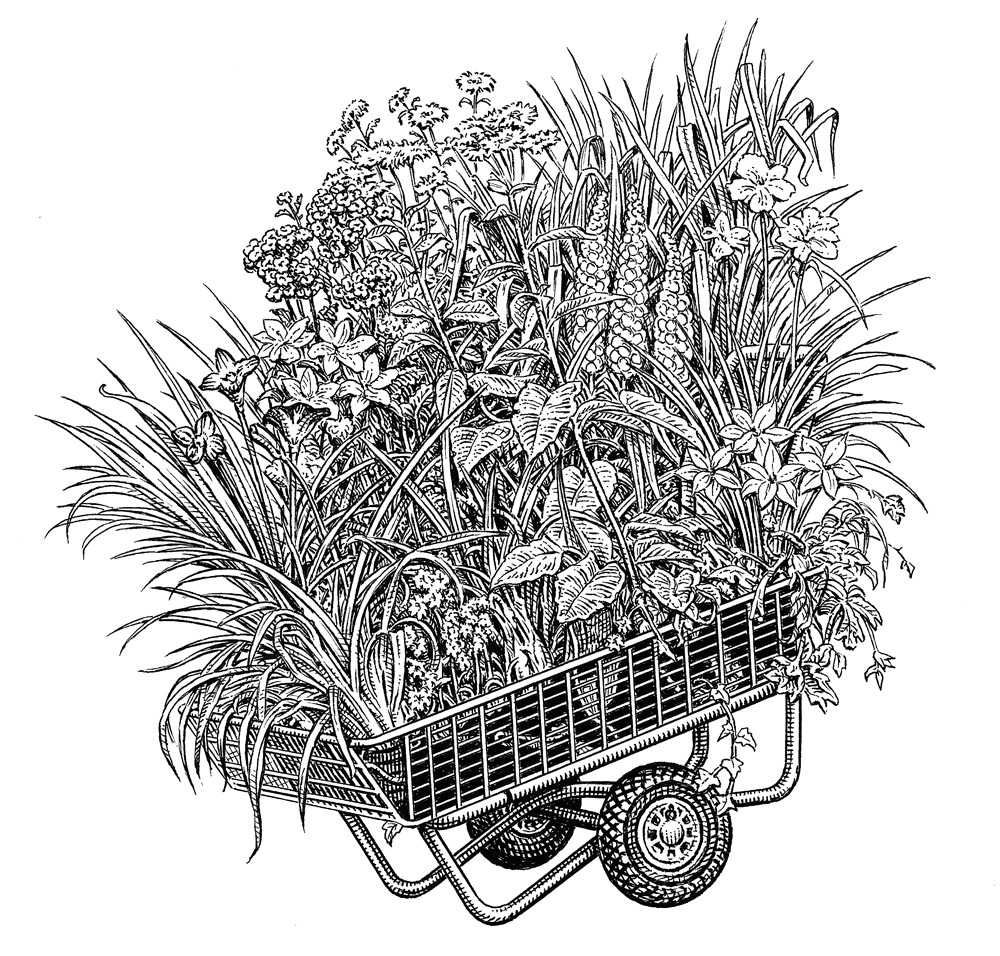 The concept of buying plants throughout the year from out of town ‘garden centres’ took off after World War II, coinciding with the development of container plants, mass motor-car ownership and a post-war housing boom.

Before the advent of the garden centre, the business of buying plants was a strictly seasonal affair. Nurserymen supplied bare-rooted plants between October and March, often on a mail order basis. Gardeners had to wait until the 1960s for the age of instant gratification to dawn, in the form of container-grown plants, available year-round from a novel mutation of the nursery, the ‘garden centre’. These new horticultural retailers (which often developed out of long-established nursery businesses) also sold fertilizers, pesticides, outdoor furniture and sundries – everything that the post-war gardener needed in one destination, with added car-parking.

Container-grown plants made the concept possible, particularly when light, easy-to-transport plastic polythene pots became widely available in the 1960s. An early UK proponent of this idea was Herefordshire nurseryman Harry Williamson (founder of Wyevale Garden Centres), who, having seen container growing in America in the 1930s, experimented with growing roses in tin cans.

UK nurseries such as Stewarts, Notcutts and Wyevale were pioneers of container-plant retailing, with Edward Stewart opening the country’s first garden centre at Ferndown, Dorset, in 1955, in converted potting sheds on the family nursery. Stewart had travelled to North America in 1953 and had realized that container plants retailed through a garden centre was the way for his business, practically bankrupted by wartime depredations, to survive. In 1961 Stewart set up a second, purpose-built, out-of-town garden centre, complete with coffee shop, in Christchurch, with BBC TV’s gardening presenter Percy Thrower officially opening its doors to the public. The whole garden centre concept was given a royal seal of approval when the late Queen Mother opened Syon Park Garden Centre in 1968.

Derived from the French word for soup (potage), the potager is, by extension, the place where the ingredients for said soup are grown – in plain English, the ‘kitchen garden’.

The potager décoratif is a productive garden in its Sunday best, with fruit, vegetables, flowers and herbs arranged as much for their aesthetic effect as for their yield. In these formally laid-out gardens, the humble vegetable is elevated to ornamental status.

Although the potager’s origins are monastic, it was Renaissance gardeners, with their love of pattern, geometry and sense of occasion, who transformed the humble veg patch into showpiece gardens, where visitors could stroll and admire the latest novelties from the New World.

At Versailles, the potager laid out for King Louis XIV by Jean-Baptiste de la Quintinie between 1678 and 1683 was the gold standard of potagers décoratifs. Extending to over 23 acres and arranged around a central fountain in a formation of squares (the best shape for a potager, in La Quintinie’s opinion), the Potager du Roi was a favourite haunt of the French king, who learned how to train fruit trees there.

While Versailles is a unique survivor, the potager at the Château de Villandry in the Loire is an early twentieth-century recreation of a Renaissance parterre garden. Conceived, like Versailles, on a grand scale, its dazzlingly geometric box-edged beds contain ramrod rows of colour-coordinated vegetables, which are treated as bedding plants, with twice-yearly planting changes. 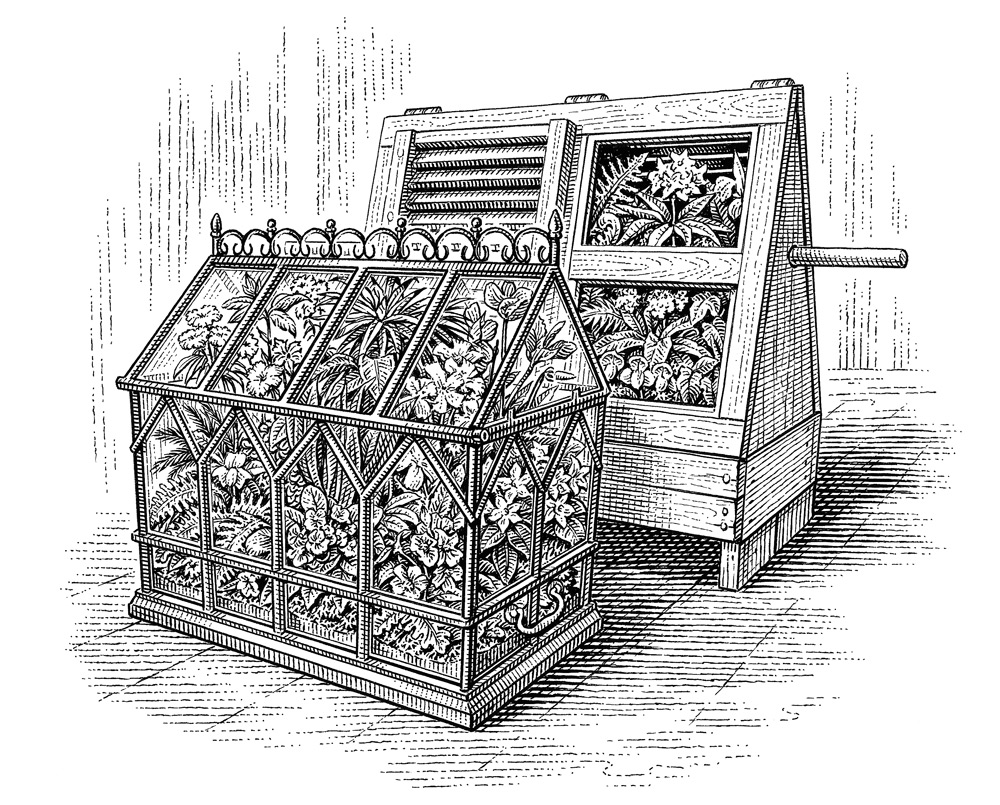 Like the storm in a petri dish that became the wonder drug penicillin, the Wardian Case was the product of an accidental discovery in a glass jar that would go on to have global significance.

Nathaniel Bagshaw Ward was a doctor with a passion for botany and natural history that the smog and pollution of his East London home could not extinguish. In around 1829, while attempting to raise a hawk moth in a sealed glass bottle, Dr Ward discovered that a grass seed and a fern had germinated in the damp leaf mould in which he had placed the moth chrysalis. The moth having pupated successfully, Ward’s volunteer plants lived on for several years in their enclosed environment, indifferent to seasonal temperature changes, sustained by the cycle of evaporation and condensation of water within the jar and protected from the noxious London smog that kept killing off Ward’s beloved collection of native ferns in his back garden.

Intrigued, Ward set about experimenting in earnest. Assisted by one of the leading nurseries of the day, Loddiges of Hoxton, two ‘Ward’s cases’ were packed with plants and dispatched to Sydney in 1833. Having survived the long voyage, the cases were repacked with Australian specimens such as Gleichenia microphylla (scrambling coral fern) and returned to England where they (and a few opportunistic Callicona serrata, or black wattle, seedlings that had germinated en voyage) arrived at Loddiges the following year in ‘the most healthy and vigorous condition’. They had not been watered during the eight-month trip and had withstood temperatures on deck ranging from –7 to 49°C (20 to 120˚F).

Plant collectors lost no time in exploiting this new technology. Prior to the Wardian case, the survival rate of plants on a long sea voyage was a dismal 1 in 20; now a survival rate of 19 out of 20 was possible. New plant introductions proliferated, and an international plant trade boomed. In 1841 Joseph Hooker used a 1.2-metre (4 -foot)-long Ward’s case to ship plants from New Zealand to his father, William Jackson Hooker, the director of Kew Gardens. His selection included ferns such

as Doodia caudata and the greenhood orchid Pterosylis banksii. In America, Dr George Rogers Hall’s mid-nineteenth-century introductions of Japanese plants such as the umbrella pine, the ornamental crab apple (Malus halliana) and Magnolia stellata all came courtesy of the Wardian case.

Ward envisaged a philanthropic use for his invention – he thought that the urban poor could use his cases for growing healthy salads. Instead it became a powerful empire-building tool, the means by which, in 1848, Robert Fortune was able to transport thousands of tea plants from China to inaugurate the tea trade in India. And it was instrumental in the introduction of quinine-bearing cinchona trees from South America to the sub-continent, and Brazilian rubber trees to Malaya (via Kew). The last shipment of plants to Kew Gardens in a Wardian case came from Fiji in 1962.

While sturdy wood-and-glass Wardian cases were criss-crossing the high seas, ornamental metal-and-glass versions filled with the fruits of many a plant-hunting expedition rapidly colonized the living rooms of the botanically minded middle classes. Resembling scaled-down greenhouses or even mini palm houses, and also available as DIY kits, these decorative terrariums allowed householders of even quite modest means to participate in the great fern and orchid crazes of the nineteenth century that had been pioneered by aristocratic plant collectors. In this, at least, the cases performed a function as egalitarian as Ward had first intended.