Alright Darling? editor and founder Greg Bailey has created a fabulous new book of the same name, showcasing his shots of the uninhibited, unapologetic and unafraid wonderland of contemporary drag. Here he shares a few of his favourite images…

Much like every other artist, I’ve never considered myself an artist, in fact I have winced once or twice when I’ve been described as one. When asked what I do, I typically say “I do photography”– not only does this sound ridiculous when I think about it, but it’s a very simplistic way of describing a profession. This is probably because I like to keep things simple when working, I get the shot I need and I move on. There is a tonne of unseen work, organisation and planning that goes into every photo-shoot, from makeup, styling, hair, countless back and forth emailing to locations and management… etc. So when it comes to it, I like to keep things quick, keep people in good spirits, and keep things calm. I just want to document the culmination of hard work of countless people that it took to get the model in front of my camera, and of course the model themselves. I am a photographer, an artist, but I’ve never felt like one, and this is because I am producer… that just happens “to do photography”.

I’ve chosen a selection of my favourite images from the book to share some stories about the subjects, and to give a glimpse of what lead to up to taking the image… 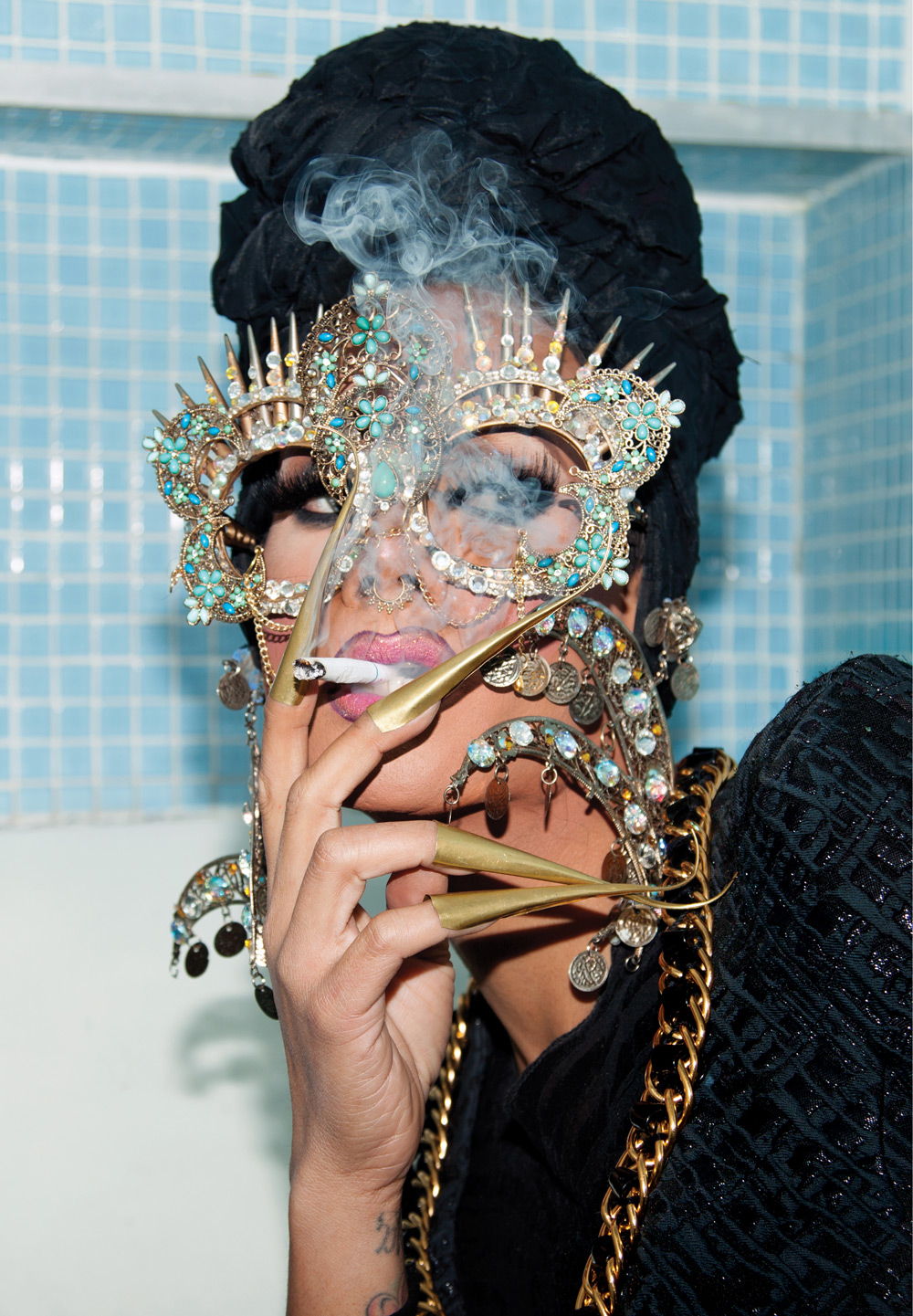 Sutan, or Raja if you go by his stage name, means so much to me. I reached out to Sutan via Facebook in 2011, simply to say how much of a fan I was and how much I loved what he did as a drag performer. He embraced me and my work so positively, it was impossible not to fall in love with him. We finally got to meet two years later in London and work together, and since then we have visited each other's houses, got drunk and high together, and gone clubbing in downtown LA. This image is actually backstage at the legendary Black Cap in Camden, London. There was a bomb scare and the venue wasn’t allowing people in or out, so we sneaked through the dressing room and into the men's toilets, so that Sutan and her friend Adam Lambert could smoke. 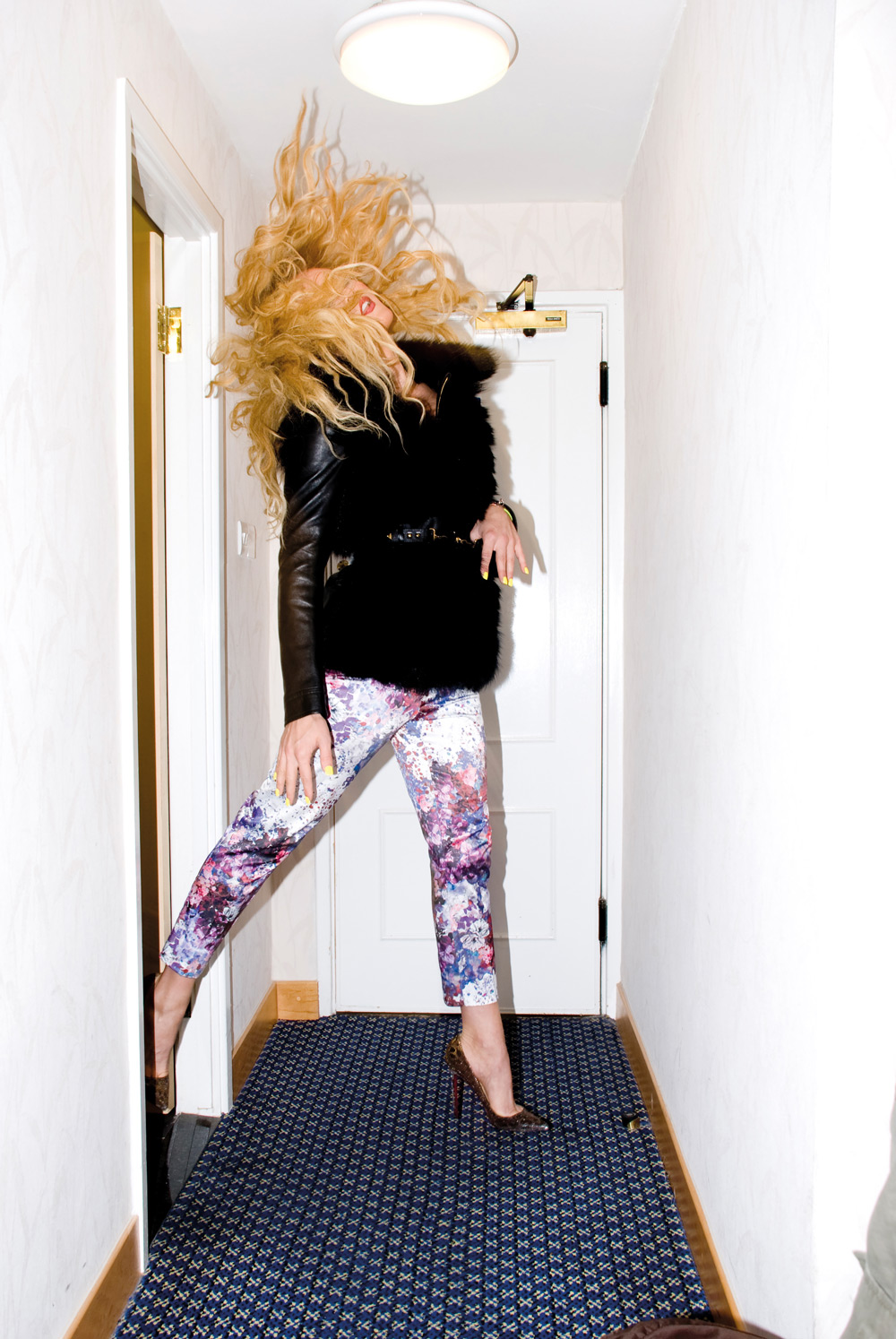 Much like Raja, I reached out to Willam via Facebook as a fan, and asked if he would ever like his picture taken if he ever came to the UK. Despite Willam’s persona of being an arsehole and flippant, he is actually one of the most supportive people I have worked with. He will always make sure I am credited if my image is posted online or in print, and when people discuss Alright Darling? he will always make sure the viewer is aware of who created the zine. Creative people will rarely have the chance to make money off the thing they love to do, so giving credit where credit is due is necessary. I’ve seen Willam do this with countless other people within the industry and I think it isn’t just admirable of him, but great to see someone set a positive example of how things should be done. This image of Willam was from the first ever shoot I did with a drag performer. I borrowed a Gucci coat from the boutique I was working in at the time, the manager neglected to ask the owner of the boutique before agreeing I could take it.

A whole year after this shoot I was pulled into a meeting with the owner of the boutique, and it came to light that the owner wasn’t just angry that I had “stolen” the coat but the owner turned out to be extremely homophobic. She threw words such as “freak” around when talking about Willam and said that Gucci had called her threatening to pull their contract with them. I relished in informing her that the coat had in fact sold the following week of the shoot (I’d like to think to someone fabulous who had seen Willam in it), so I couldn’t have stolen it, and that Gucci would never pull a contact from a boutique for an LGBTQ+ person wearing their products. I am glad to say I didn’t work for the company for much longer after that. 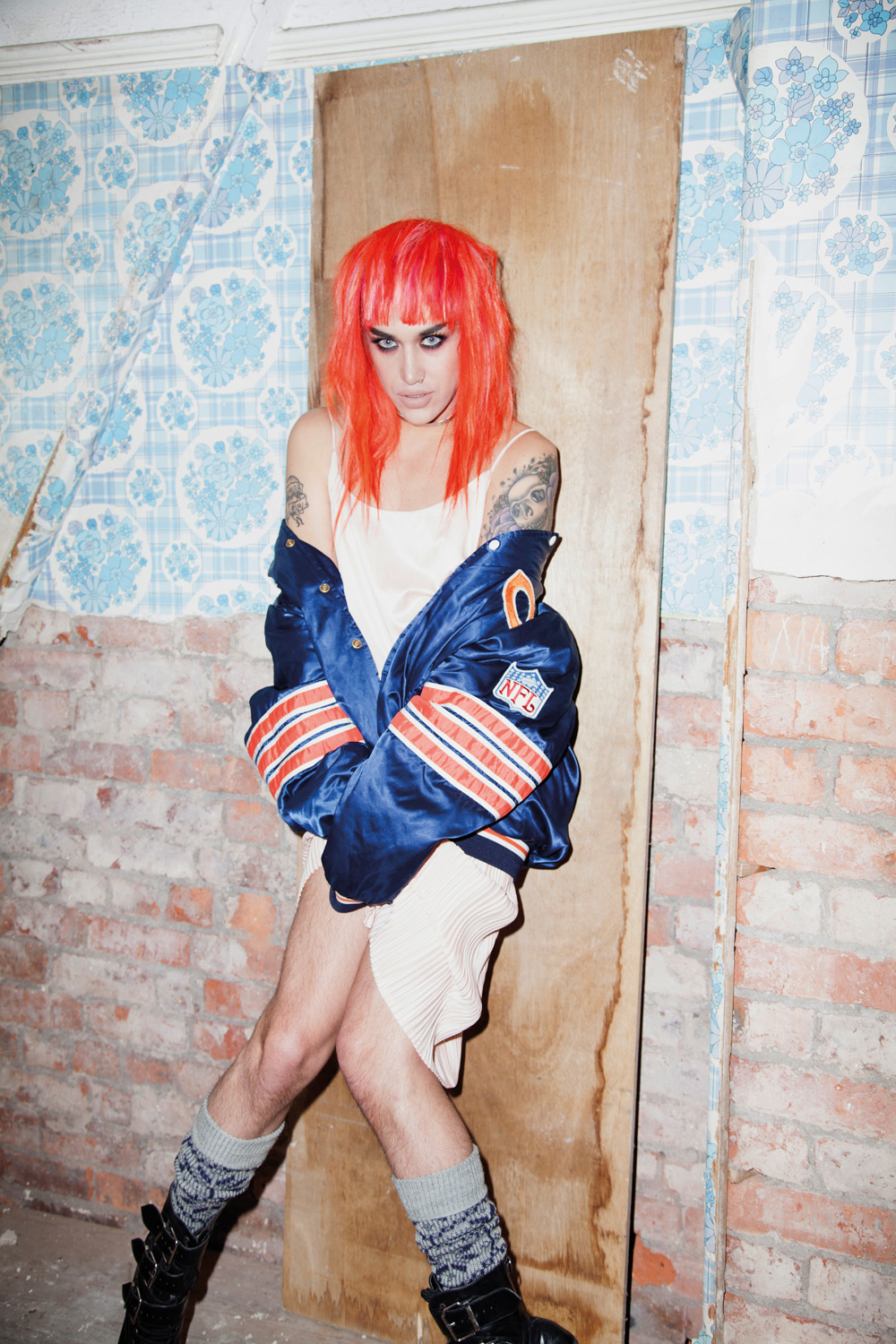 For this shoot I was lucky enough to have more than a stolen hour out of Adore’s schedule, not that I would ever turn my nose up at that but it’s a dream when someone says “sure let’s hang out, I have a free day”. So I took the rare opportunity to fully produce a shoot that I’d been cooking up in my mind for a while. I tried to get to the core of who Adore was, so I drew inspiration from grunge music and female alt rock icons like Courtney Love and Brody Dalle, and styled every outfit with this in mind (and only chose from vintage clothing), I also teamed up with a brilliant hair stylist called Daniel Leo Stanley who created a wig based on reference imagery of Milla Jovovich's character Leeloo in The Fifth Element, and the lead singer of Paramore.

To say I lucked out on the location is an understatement. Being in full-time employment in Brighton I rarely get the opportunity to go further than London on my travels and had never been to Manchester, but Adore's schedule meant that the only downtime  on her tour was while she was on her Manchester leg. This meant I kind of had to scrabble around on the internet trying to find locations, not knowing how easy it was to get to them, where they actually were in relation to Adore's hotel etc, but I found an amazing Victorian baths that hosted art events, which was beyond perfect. Above the baths (which I learned just so happened to be a location on the popular TV show Peaky Blinders), was an old apartment that would of belonged to the caretaker. The baroque wallpaper was peeling, the floorboards were exposed, it was perfect! So we cracked open the beers and got to shooting. 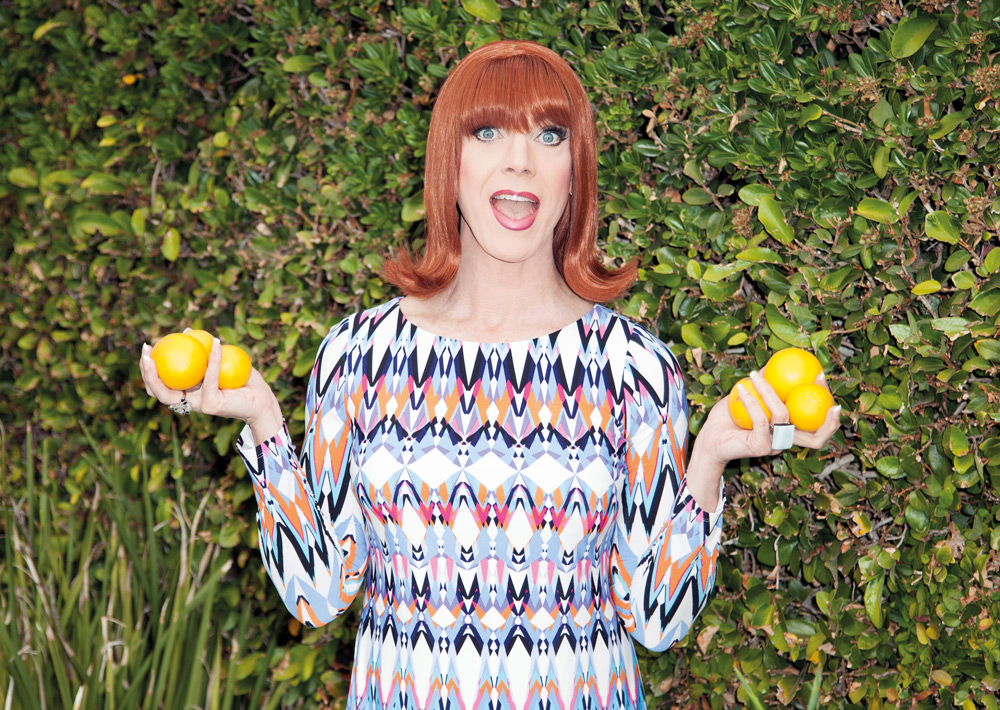 Photographing Coco Peru was a milestone moment for me. My partner and I travelled to LA for it. It was my first time in America and it was the first time I could afford to do something on a bigger scale, thanks to the sales and the successful Kickstarter campaign from Alright Darling? issue two. For the first time I felt I was being taken seriously for what I wanted to do, and people were enjoying it. People say you should never meet your idols, and I’m glad to say that this wasn’t one of those occasions, Coco was amazing. We actually got to go to Coco’s house and photograph her in one of those “follow me into my gracious drawing room” style shoots of Hello magazine. We sat in Coco’s garden drinking coffee and discussing her upbringing in New York, she picked lemons from her lemon tree for us (they were the most delicious lemons I’d ever tasted!). And yes… we were given a box of Celestial Seasonings Tension Tamer tea. 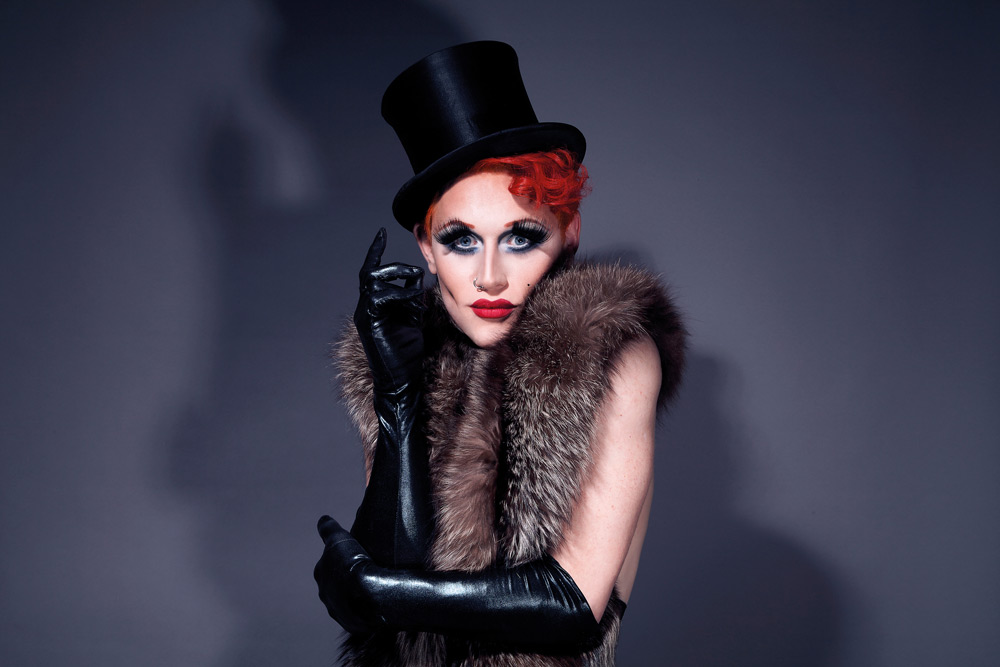 Joe Black is a staple figure in my career as a photographer. I first met Joe and his partner Arran on my first shoot with Jinkx Monsoon back in 2013. Since then I have shot imagery for his tour posters, promo imagery for press, he has interviewed countless RuPaul’s drag racers for me, and we even spent a day shopping in Cardiff Primark with Jinkx  Monsoon and Michelle Visage, which was surreal to say the least.

This particular image means a lot to me as it was for the first issue of my zine Alright Darling?, and it was one of the rare times I decided to choose studio lighting over my preferred flash gun. We pushed all the furniture to the sides of my living room and set up a backdrop, my dog Effie was milling around in and out of shot and we just listened to music and drank coffee. It was such a relaxing shoot. The image itself always seems to pop up when I least expect it, in illustrations, randomly online on blogs and Tumblr, and I’ve even seen people with it tattooed on them!